In continuation with NaBloPoMo I thought it would be fun to dedicate Tuesday’s this month to a different palette. Considering I am a palette junkie this in a little dive into my collection. I’ve been thinking about doing this for awhile as I’ve been asked to do a post (or posts) on it. If all goes well, I’ll continue to work through my ever-growing collection until I hit the end (is there ever an end?!). To start off though, I’ll go through ones that I’m pretty sure I haven’t done a dedicated post on in the past. So, today I’m starting off with the Kat Von D Alchemist Holographic Palette. I picked this beauty up in August but haven’t previously featured it on the blog.

The Kat Von D Alchemist Holographic Palette is a transformer palette that can be used on the eyes, lips and face. It definitely holds true to being multipurpose as I have used it in all three ways so far. While it isn’t truly holographic (why do brands so loosely use this term?!), all four shades have a beautiful shift to them. They all look nearly white in the pan, but when they catch the light their true pigmentation shines through.

All four shades are surprisingly pigmented as you can see from the swatches below. I let my sister use my Kat Von D Alchemist Holographic Palette last week and she immediately expressed shock of how pigmented it is. The great part is though is that because of the duo-chrome it isn’t look overly intense as you only catch the intensity of the shade in certain lighting. I have yet to over-do it using this palette. 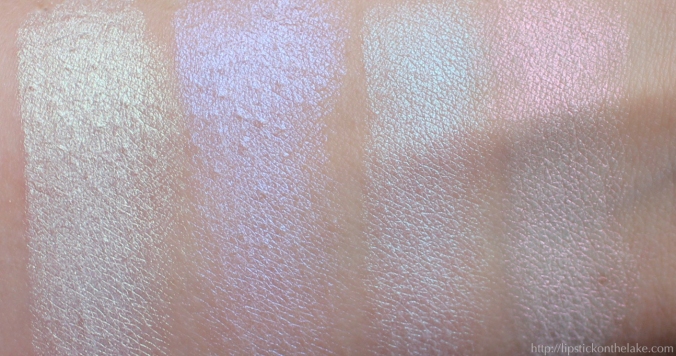 Have you tried the Kat Von D Alchemist Holographic Palette yet? Let me know in the comments down below!