November ended up being more of a reading month than I anticipated it would be. My book-wormy-ness took over and I had my nose in a book quite often last month. I think this had to do with how sick I was all month and how I wasn’t up for much else. I managed to finish four books in November so I think I should still remain ahead of my goal for the year! Let’s take a look at what I wrote…

For as long as anyone can remember, Britt-Marie has been an acquired taste. It’s not that she’s judgemental, or fussy, or difficult – she just expects things to be done in a certain way. A cutlery drawer should be arranged in the right order, for example (forks, knives, then spoons). We’re not animals, are we?

But behind the passive-aggressive, socially awkward, absurdly pedantic busybody is a woman who has more imagination, bigger dreams and a warmer heart than anyone around her realizes.

So when Britt-Marie finds herself unemployed, separated from her husband of 20 years, left to fend for herself in the miserable provincial backwater that is Borg – of which the kindest thing one can say is that it has a road going through it – and somehow tasked with running the local football team, she is a little unprepared. But she will learn that life may have more to offer her that she’s ever realised, and love might be found in the most unexpected of places. Source

After reading A Man Called Ove a couple of months ago I knew I had to pick up another Fredrik Backman novel. Britt Marie Was Here was very similar in style and I really quite enjoyed it. In fact, I may even call it the female version of A Man Called Ove.

Elizabeth’s eyes have failed. She can no longer read the books she loves or see the paintings that move her spirit, but her mind remains sharp and music fills the vacancy left by her blindness as she ruminates on the secrets in her family’s past.

When her late father’s journals are discovered on a shipwrecked boat, she enlists the help of a delinquent teenager, Morgan, who is completing community service at the senior home where Elizabeth lives. An unlikely relationship develops between the two as they work to decipher the books and are drawn into the musty words he penned more than seventy years before as he manned the lighthouse on Porphyry Island. Source

I can’t even begin to explain how much I loved this book. Written by a Thunder Bay author it really touched on so many places that are familiar and important to me. Every time I saw Silver Islet mentioned I felt a surge of happiness and familiarity. The storyline itself was really quite captivating as well and enjoyable. I’d definitely read it again and do highly recommend it.

The Husband’s Secret by Liane Moriarty

My darling Cecilia,
If you’re reading this, then I’ve died…

Imagine your husband wrote you a letter, to be opened after his death. Imagine, too, that the letter contains his deepest, darkest secret—something with the potential to destroy not only the life you built together, but the lives of others as well. And then imagine that you stumble across that letter while your husband is still very much alive…

Cecilia Fitzpatrick has achieved it all—she’s an incredibly successful businesswoman, a pillar of her small community, and a devoted wife and mother. But that letter is about to change everything—and not just for her. There are other women who barely know Cecilia—or each other—but they, too, are about to feel the earth-shattering repercussions of her husband’s secret. Source

Big Little Lies was one of the novels I finished over the summer months and it left me wanting more so I picked up The Husband’s Secret by the same author. It did take me a bit longer to get into this one but once Cecilia reads the letter from her husband, I was hooked. I really enjoyed this book, in particular, I enjoyed the epilogue.

Turtles All the Way Down by John Green 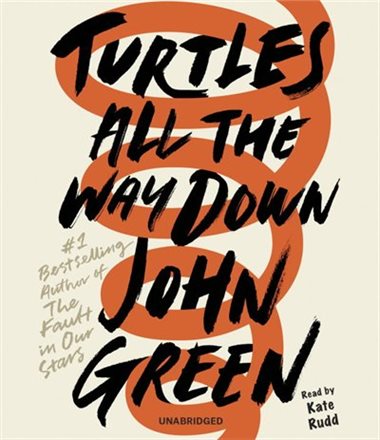 It’s quite rare to find someone who sees the same world you see.

Sixteen-year-old Aza never intended to pursue the mystery of fugitive billionaire Russell Pickett, but there’s a hundred-thousand-dollar reward at stake and her Best and Most Fearless Friend, Daisy, is eager to investigate. So together, they navigate the short distance and broad divides that separate them from Russell Pickett’s son, Davis.

Aza is trying. She is trying to be a good daughter, a good friend, a good student, and maybe even a good detective, while also living within the ever-tightening spiral of her own thoughts. Source

I’ve read nearly all of John Green’s books so when I saw he came out with a new one I had to pick it up. I don’t know if I’d call this his best book, as I really enjoyed Looking for Alaska and Paper Towns, but I did enjoy it. In particular, I loved all the Star Wars references as I’m currently super excited for the Last Jedi.

The pink represents the goal for each month(s) and the purple is what I actually read. The final column shows my progress compared to where I should be with my yearly goal (reading 240,000 words per month). I think being sick for the entire month of November allowed me to up my reading game a bit. I did a lot of reading while waiting at the walk-in clinic and then at home as well as I wasn’t feeling up to doing much else aside from reading and watching Netflix. I still remain ahead of my goal for the year!

Have you read anything great lately? Let me know in the comments down below! If you’re looking for more reading suggestions be sure to check out my previous Love of Reading posts!